Have you ever followed a wrong group of people or sat down and started talking to a stranger thinking it is your aunt and realizing your mistake only after a few seconds?

If not, don’t worry – it only means we are not related. As these kind of mistakes are common mostly in my family.

Last Tuesday we were supposed to have a call within my company. Sometimes instead of sitting separately in front of our desks, we go to one conference room, dial in and listen to all speeches together. On Tuesday I saw our 2 managers going towards one of conference rooms just before our call so I just followed. Then I saw about 10 people that I did not recognize and I thought to myself: “Gosh I did not read what the call is about, maybe we will be also talking to some new strategic partners of the bank. Oh well, I’d better take a seat.” Just after installing myself I saw one of my bosses with a big smile on her face saying: “Kasia it is a management meeting, of course you can join if you want, but I think you wanted to participate in a different call.” 😀

As talking to wrong people is apparently genetic, these situations happened a lot to my sister or myself. One day she was waiting for her boyfriend who was supposed to come in a white Renault Kangoo. When she saw the car, she just jumped into it and wanted to give him a good morning kiss. Just then she saw he was very hairy 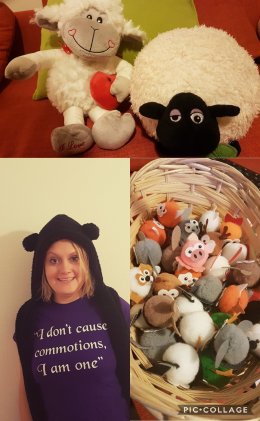 and thought to herself “Hmm! I need to tell him diplomatically that he should shave more often.” But then she saw a surprised but also an amused look  on her boyfriend’s face just to realize it was not him 🙂

If you did not recognize these symptoms yet. there is a big chance they won’t happen. It all starts in an early childhood, e.g. I once confused my uncle with my sister’s (and 6 years later also my) music teacher realizing it when I was already on his kneels wanting him to tell me one of stories from his sailor’s trips.

But if you already had these kind of funny stories, please share with us, maybe you are one of our lost cousins as there are not as many crazy families causing as many commotions as ours 😉